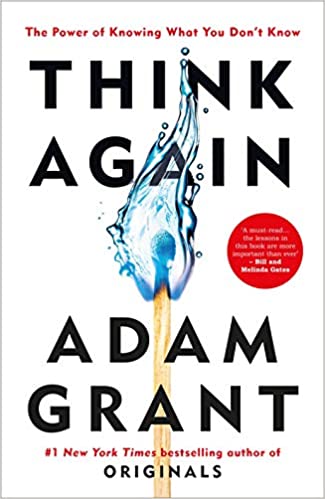 In this book, Adam Grant argues that the trait of regularly rethinking our beliefs is what distinguishes leading thinkers from the rest. These individuals are willing to update their beliefs in the face of new evidence, but are not too easily swayed by new information. Grant argues that this trait of being able to rethink is extremely important, particularly in a world of fast information. It might be even more important than conventional measures of intelligence like IQ.

“When people reflect on what it takes to be mentally fit, the first idea that comes to mind is usually intelligence. The smarter you are, the more complex the problems you can solve—and the faster you can solve them. Intelligence is traditionally viewed as the ability to think and learn. Yet in a turbulent world, there’s another set of cognitive skills that might matter more: the ability to rethink and unlearn.”

Unfortunately, most of us are bad at rethinking. We cling onto familiar tools that help us navigate our daily lives - these tools include assumptions, instincts, and habits.

Why is it so hard to rethink these tools? Because dropping our opinions doesn't just require us to unlearn habits and disregard our instincts. It also requires us to admit failure and let go of part of our identity. This hurts our egos.

This book is about why and how we should cling less to a certain set of tools and learn to adopt the tool of open-mindedness instead. This book summary is divided into 3 sections, corresponding to each part of the book:

How to get yourself to rethink

Inside of us all is a Preacher, Prosecutor, and a Politician

Preaching, prosecuting, and politicking all prevent us from rethinking. Rather than adopting one of the three Ps, we should learn to think like Scientists instead.

“If you’re a scientist by trade, rethinking is fundamental to your profession. You’re paid to be constantly aware of the limits of your understanding. You’re expected to doubt what you know, be curious about what you don’t know, and update your views based on new data. In the past century alone, the application of scientific principles has led to dramatic progress.”

Importantly, scientific thinking is not just for people who work in labs. Hypotheses appear everywhere in our daily lives. And experiments can inform how we should behave in real life. To illustrate this, Grant cites a study on more than 100 startup founders in Italy. Participants were randomly assigned to either a "scientific thinking" group or a "control group". Over the following year, the startups in the control group averaged under $300 in revenue while the startups in the scientific thinking group averaged over $12,000 in revenue. Why? Scientific thinking group encouraged to view startups through scientists' lens. The researchers who ran this study found that entrepreneurs who had been taught to think like scientists changed their decisions more than twice as those in the control group. When hypotheses were not supported, they knew it was time to rethink their business models.

A lot of people suffer from a deficit in meta-cognitive skills. We're bad at thinking about thinking, so we're blind to our own incompetence. As a result of this, we confuse confidence with competence.

This confusion between confidence and competence is described by the Dunning-Kruger effect. In the original Dunning-Kruger studies, people who scored the lowest on tests of logical reasoning, grammar, and sense of humor had the most inflated opinions of their skills. They thought they did better than 62% of their peers, but in reality outperformed only 12% of them.

“In too many domains of our lives, we never gain enough expertise to question our opinions or discover what we don’t know. We have just enough information to feel self-assured about making pronouncements and passing judgment, failing to realize that we’ve climbed to the top of Mount Stupid without making it over to the other side.”

Grant thinks that we shouldn't be open-minded in every circumstance. There are situations where it makes sense to preach, prosecute, and politick. Yet, most of us would benefit from being more open most of the time. How do we strike a balance? Grant emphasizes the importance of being “confidently humble”.

“What we want to attain is confident humility: having faith in our capability while appreciating that we may not have the right solution or even be addressing the right problem. That gives us enough doubt to reexamine our old knowledge and enough confidence to pursue new insights”

Our natural tendency is to surround ourselves with agreeable people who cheer for us ("yes men”). We concentrate on building support networks rather than challenge networks. This can be detrimental to longer-term growth.

“Agreeable people make for a great support network: they’re excited to encourage us and cheerlead for us. Rethinking depends on a different kind of network: a challenge network, a group of people we trust to point out our blind spots and help us overcome our weaknesses. Their role is to activate rethinking cycles by pushing us to be humble about our expertise, doubt our knowledge, and be curious about new perspectives”

“I’m looking for disagreeable people who are givers, not takers. Disagreeable givers often make the best critics: their intent is to elevate the work, not feed their own egos. They don’t criticize because they’re insecure; they challenge because they care. They dish out tough love.”

How to get others to rethink

The second part of the book is to do with how to get other people to rethink. Grant's main argument is that in order to persuade people, we often take an adversarial approach. But this has the effect of shutting them down and riling them up rather than opening their minds.

Evidence seems to suggest that you can rarely (if ever) change someone's mind directly. However, you can help them get to a place where they are ready to change their own minds! Rather counterintuitively, this means that the most effective way to get other people to change their minds is to listen to them rather than speak at them.

A technique that falls under the umbrella of persuasive listening is ‘motivational interviewing’. The central premise of this technique is that we can rarely motivate someone else to change so we're better off helping them find their own motivation to change. As a motivational interviewer, your role is to hold up a mirror so that they can see themselves more clearly, and then empower them to examine their beliefs and behaviours.

Second, ask them counterfactual questions. Many of our opinions are arbitrary, derived from the communities and social norms that surround us. To help them reevaluate, prompt them to consider how they'd believe different things if they'd been born in a different time or different place (counterfactual thinking). You could ask questions like: if you were born Black, Hispanic, Asian, or Native American, how would your stereotypes be different?

We should approach debates/disagreements as a dance, not a war. This means that you can't just lead your partner through the dance. You need to adapt your moves to hers and get in rhythm with each other. There are several ways to do this.

First, try to find common ground with your dance partner. Use phrases like "So, I think we disagree far less than it may seem."; "It looks like we both agree on X, Y, Z." This is useful because we acknowledge where we agree with our opponents and what we've learned from them. Furthermore, find the steel man (strongest version of their argument) rather than the straw man (weakest version) of their argument.

Second, don’t overload your dance partner with too many reasons. Do not overload people with facts and data points to back up your argument. When people are riled up, they are going to reject this evidence or interpret it in a way that supports their initial belief.

Third, give your dance partner a choice. Sometimes people resist listening not because they're dismissing the argument but because they're rejecting the feeling of their behavior and thoughts being controlled. It helps respect their autonomy by reminding them that it's up to them to choose what they believe.

How to think together

The third part of this book is about how we can become a community of re-thinkers.

Human beings suffer from ‘binary bias' presuming that the world is divided into two sides (e.g. believers and nonbelievers). This is the result of the basic human tendency to seek clarity and closure by simplifying a complex continuum into two categories. Grant proposes several steps to advance collective rethinking:

First, recognize that there are almost always more than two sides to every story. Instead of treating polarizing issues like two sides of a coin, look at them through shades of gray.

Second, learn to love caveats (limitations of your statements) and contingencies (places/populations where your opinion/result might not hold). This will help us acknowledge competing claims and conflicting results, opening up the space for rethinking. Grant admits that this is something he has struggled with in the past:

“In some of my past writing for the public, though, I regret not having done enough to emphasize areas where evidence was incomplete or conflicting. I sometimes shied away from discussing mixed results because I didn’t want to leave readers confused. Research suggests that many writers fall into the same trap, caught up in trying to “maintain a consistent narrative rather than an accurate record.”

Third, learn to accept conflicting emotions. We don't have to eliminate frustration to have a productive conversation.

“What stands in the way of rethinking isn't the expression of emotion; it’s a restricted range of emotion. So how do we infuse our charged conversations with greater emotional variety—and thereby greater potential for mutual understanding and rethinking? It helps to remember that we can fall victim to binary bias with emotions, not only with issues. Just as the spectrum of beliefs on charged topics is much more complex than two extremes, our emotions are often more mixed than we realize. If you come across evidence that you might be wrong about the best path to gun safety, you can simultaneously feel upset by and intrigued with what you've learned”

Teach the next generation to rethink

To move towards a community of rethinkers, it is important to inculcate in children a love for rethinking. It's easier to learn to debunk false beliefs at an early age. Grant suggests several ways to do this:

Turn your workplace into a learning culture where people feel confident that they can question and challenge the status quo without being punished. To achieve this, we need to strive for a particular combination of psychological safety and accountability.