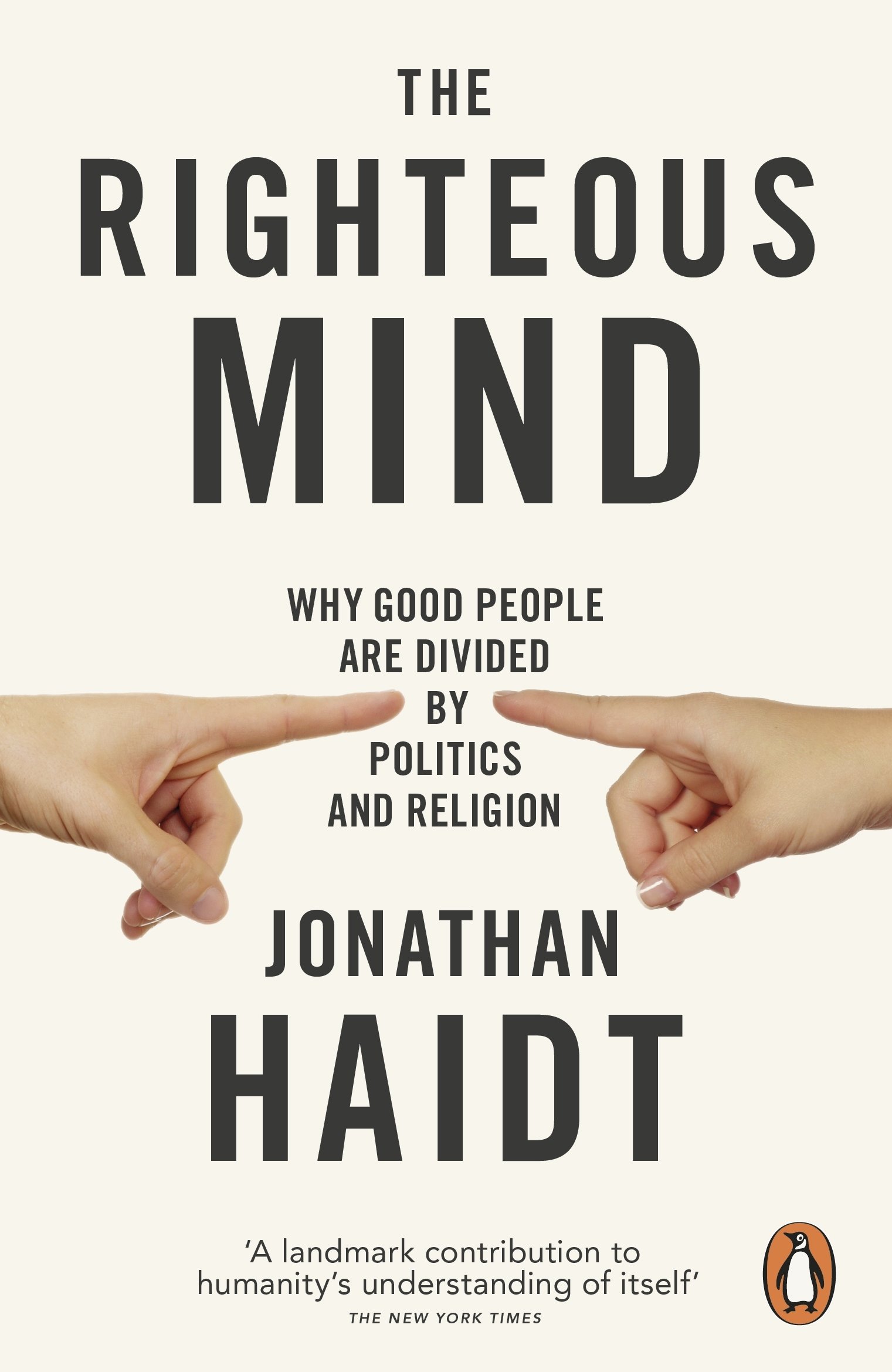 This was enlightening. I read this in 2020, post Biden victory, but wish I had read it earlier. The book provides the best answer I've seen on why people with different beliefs and values find it so hard to talk to each other.

These notes are divided into three parts, following the three sections of the book. The following paragraphs provide a quick summary of each of these parts. A more detailed discussion of each part can be found in the subsequent sections.

Part 1: The origin of morality

Main question: Where does our sense of right and wrong (our moral knowledge) come from?

Haidt’s answer: We’re born with certain moral “intuitions”. We then make justifications for why such intuitions are correct. Our moral brains are like a rider on a big elephant. The elephant represents automatic/unconscious thought, informing us about what is right and wrong. The rider represents process/conscious thought, helping us make justifications for why we have such beliefs about what’s right and wrong.

Main question: What kind of moral knowledge are we born with?

Haidt’s answer: Just like how our tongues have different receptors to different foods, we have 6 innate moral taste buds that make us react to moral/immoral behaviour. Different compositions of these 6 moral tastebuds result in different moral systems. This means that morality isn’t based on one single foundation (e.g. the rightness or wrongness of an action can’t purely be determined by whether it harms someone). It also helps explain why moral systems differ across people, times, and places.

Main question: Why are we so divided (about politics and religion)?

Haidt’s answer: Because our moral systems binds us to the groups that we think we belong to and blinds us to the moral arguments that other people make. This makes it very difficult for people to consider the possibility that there might really be more than one form of moral truth or more than one valid framework for thinking about a problem.

1. The Origin of Morality

The first part of this book deals with the question: Where does our moral knowledge come from? There are three possible answers to this question. (Haidt argues for a mix of 1 and 2):

A large chunk of this section provides evidence in favour of the nativist view through a series of experiments that go like this:

"A family’s dog was killed by a car in front of their house. They had heard that dog meat was delicious, so they cut up the dog’s body and cooked it and ate it for dinner. Nobody saw them do this.”

In a series of such experiments, Haidt and his co-researchers find that people usually have strong gut feelings about what is right and wrong. For example, most people think that what the family did was plain wrong. However (and here’s the important bit), they struggle to come up with justifications for why they feel that way (they’re “morally dumbfounded”). While writing these notes, I still can’t figure out a good reason why I intuitively think the family shouldn’t eat the dead dog. As Haidt points out, the family isn’t harming anyone since the dog was dead. They aren’t offending anyone either, since nobody saw them do this.

The outcomes of these experiments suggest that morality is innate and unlikely to be self-constructed (as the rationalist view suggests). If morality were self-constructed, then we would only arrive at our feelings of disgust and disrespect about the dog-eating story after having considered whether the family harmed anyone.

Now, it’s important to clarify what “innateness” actually means. A mistake I made is to think that innate means you’re born with something that’s fixed for life. Instead, Haidt encourages us to use the definition provided by neuroscientist Gary Marcus:

“The brain is like a book, the first draft of which is written by the genes during fetal development. No chapters are complete at birth, and some are just rough outlines waiting to be filled in during childhood. But not a single chapter—be it on sexuality, language, food preferences, or morality—consists of blank pages on which a society can inscribe any conceivable set of words. Marcus’s analogy leads to the best definition of innateness I have ever seen: “Nature provides a first draft, which experience then revises.… “Built-in” does not mean unmalleable; it means “organized in advance of experience”…"

Note that “innateness” doesn’t mean reasoning doesn’t matter. Remember that the experiments show that we have gut reactions to certain actions and then, when asked why we have those feelings, we scramble to justify those feelings. When we engage in this act of justification, we’re not reconstructing reasons why we ourselves should come to a judgment (we just believe that the family shouldn’t eat the dog), rather we’re finding reasons why somebody else (even if it’s just the experimenter) should believe what we believe.

This process of moral thinking is summed up by Haidt’s social intuitionist model which combines answers (1) and (2) to the main question of this section.

Haidt argues for a six-foundation morality that combine to create different moral systems and cultures. This idea departs heavily from one-foundation moralities like the harm principle which says that we can determine whether an action is right or wrong purely by the harm it creates.

“Until recently, Americans addressed strangers and superiors using title plus last name (Mrs. Smith, Dr. Jones), whereas intimates and subordinates were called by first name. If you've ever felt a flash of distaste when a salesperson called you by first name without being invited to do so, or if you felt a pang of awkwardness when an older person you have long revered asked you to call him by first name, then you have experienced the activation of some of the modules that comprise the Authority/subversion foundation.”

“Everyone—left, right, and center—cares about Liberty/oppression, but each political faction cares in a different way. In the contemporary United States, liberals are most concerned about the rights of certain vulnerable groups (e.g., racial minorities, children, animals), and they look to government to defend the weak against oppression by the strong. Conservatives, in contrast, hold more traditional ideas of liberty as the right to be left alone, and they often resent liberal programs that use government to infringe on their liberties in order to protect the groups that liberals care most about.

From this, Haidt concludes that “Republicans understand moral psychology better than democrats”. Now, here’s where Haidt thinks there’s room for Democrats to improve in. Suppose you’re a voter whose 6 moral tastebuds are all somewhat sensitive, you are most likely going to vote for someone who embraces all of these concerns to some degree. If your Liberal representative seems to only talk about things that appeal to your Care and Fairness tastebuds and seem ambivalent about all the other tastebuds, you might go searching for someone who appeals to all your tastebuds instead.

Okay, let’s take a step back. So, we’ve shown that (a) moral knowledge is innate and (b) we have at least 6 moral tastebuds. Can these two things explain why we’re so divided over politics, religion, social policies? Apparently, yes. If we bring together the theories of what Haidt proposed with the theories of evolutionary biology, we can get a better sense of why we are such “groupish” people.

Here’s how the story goes.

Step 1: we’re born with certain genes that give some people’s brains that are more reactive to certain triggers. E.g. people with “liberal” genes need less order and structure; people with “conservative” genes react more to reminders of death.

Step 2: these genes guide us down on different paths and life experiences. E.g. a kid with “liberal” genes might be more willing to go to a big city for college while a kid with “conservative” genes might prefer to go to a college in their small town.

Step 3: with these experiences, we start to tell stories to ourselves about who we are. And we start looking for people who fit into this story we tell ourselves.

Step 4 (Binding): With some sense of who we are, we start to bind ourselves to groups. These groups can come in many forms: your sports team, your political team, your religion, your music band. These groups in turn help reinforce our identity. Once we’re part of a group, we become really groupish. We promote the interests of our own groups, especially when we’re competing with other groups. From an evolutionary standpoint, this groupish trait makes sense. Group-level selection means that we all have a “hive switch” that can be switched on any time. When this hive switch is on, we transcend self-interest and become part of something bigger than ourselves.

Step 5 (Blinding): Once we’re fully bonded to our group, we become BLIND to the arguments of other groups. Once you tell yourself a story about why your group is the best, it’s hard to believe that there are different ways of looking at the world.