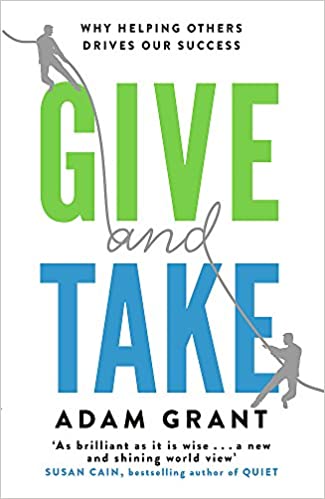 A really important book for me. Most of us are brought up to believe that niceness and kindness are good things in the world and that the world would be a better place if there's more of them. But most of us also probably believe that being too nice or too kind can bite you in the back because you end up letting other people get ahead - both in your professional and personal life. This book says: there's a way to be nice and kind while getting ahead.

This book summary is divided into the following sections

(3) How to avoid being taken advantage of as a giver

(4) How to create a culture of givers

There are three styles of reciprocity:

The common refrain "nice guys finish last" might lead you to think that givers also come last. This book debunks this myth. Adam Grant argues that:

"Being a giver is not good for a 100-yard dash, but it's valuable in a marathon."

"Focus attention and energy on making a difference in the lives of others, and success might follow as a by-product."

Action point 1: Watch out for takers when you are forming relationships.

Action point 2: Do things for other people without expecting anything specific back in return, but be confident in the belief that someone else will do something for you down the road.

Action point 1: Take on tasks that are in the group's best interest, not necessarily your own personal interests.

Action point 2: Do not exaggerate your own contributions relative to others' inputs (responsibility bias).

"The key to balancing our responsibility judgements is to focus our attention on what others have contributed. All you need to do is make a list of what your partner contributes before you estimate your own contribution."

Action point 3: Put yourself in other people's shoes and ask "how will the recipient feel in this situation?"

Action point 2: Don't be afraid to let go of bad "investments" you've made in people.

Action point 3: Receive criticism and advice from others, even if it challenges your own beliefs.

There are 2 paths to influence.

There are also 2 broad methods of communicating:

3. How to avoid being taken advantage of as a giver

2. Keep your impact in sight

Perception of impact serves as a buffer against stress, enabling employees to avoid burnout and maintain their motivation and performance.

4. Be willing to seek help

When you're on the brink of a burnout, seek help from others! This enables you to marshal the advice, assistance, and resources needed to maintain your motivation and energy.

5. Know who is likely to manipulate you so you can protect yourself

Disagreeable people are not necessarily takers. You need to look inside them. Giving and taking are based on our motives and values, and they're choices that we make regardless of whether our personalities trend agreeable or disagreeable. Whether you're nice or not nice is separate from whether you're self-focused or other-focused. They're independent, not opposites. There are disagreeable givers: people who are rough and tough in demeanor, but ultimately generous with their time, expertise, and connections.

6. Be sympathetic, not empathetic

When we empathize at the bargaining table, focusing on our counterparts' emotions and feelings puts us at risk of giving away too much. Instead, you should take in your counterparts' thoughts and interests to find ways to make deals that satisfy our counterparts without sacrificing our own interests.

7. Shift your reciprocity style depending on the situation

Become a matcher in your exchange with takers - "tit for tat" strategy. But don't be unwilling to forgive. You should adopt a generous tit for tat strategy instead: "never forget a good turn, but occasionally forgive a bad one."

8. When bargaining/negotiating, imagine you are doing so as a mentor for someone else

Research shows that when women are asked to bargain/negotiate for a friend, they are much more demanding than if they are bargaining for themselves. Make requests on behalf of someone else - this preserves your image as a giver.

4. How to create a culture of givers

When people share an identify with another, that person takes on an otherish quality. We seem to prefer people and things that remind us of ourselves.

2. Give to lead an example

The visibility of giving can affect reciprocity styles. People end up taking because they don't have access to information about what others are doing/think that this is the norm. By shifting the norm to giving, they are more likely to give (especially if they have matcher personalities). Takers will also know that in public, they'll gain reputational benefits for being generous in sharing their knowledge, resources, and connections.

3. Internalize the act of giving